WILL RAILWAYS IN INDIA BE ON TRACK?? TODAY WHAT RAIL BUDGET WILL SAY??

Departing Platform One at New Delhi station last week was India's fastest train: the test run of the Delhi-Agra express - dubbed "semi-high speed" by local media - topped a record-breaking 160 kilometres per hour on its way to the Taj Mahal. But the velocity, though triple the 50 kilometres average clocked on trips across the country, is barely one-third of the top-speed of China's fastest train, showing the extent to which India's expansive but under-funded train network has failed to keep pace."The capacity of the track is almost saturated," Anurag Sachan, divisional railway manager for Delhi, said in his office next to New Delhi's giant station. "We could go as high as 200 km but we would need to have a completely new track for higher speeds." Budget may not announce major exemptions for salaried class Prime Minister Narendra Modi, who started out selling tea outside a train station, has promised to modernise India's railways and build high-speed engines befitting Asia's third-largest economy. On Tuesday, his new government will unveil its maiden railways budget, with expectations high that he will offer bold plans to improve the service - a lifeline for 23 million Indians every day. Among the goals is bringing much more private money into one of the country's largest state-controlled industries. At present, there's small private involvement in suburban services and locomotive manufacturing. In a speech last week, Modi hinted at how much of a revamp he believed the railways needed, telling an audience in Kashmir that he wanted an upgrade of stations, many of which look much as they did under the British. "Why do our railway stations need to be so old, why can't they be better than our airports?" he said, after waving a green flag to inaugurate services on a stretch of track in the mountain state. PARTNERSHIPS NEEDED Modi's government will announce plans for public-private partnerships in railway infrastructure, the Economic Times reported on Monday, citing government sources, and he is expected to update the country on plans for a high-speed rail between the financial capital Mumbai and Ahmedabad. "If the railways are to fully benefit the climate, the economy, society, the government needs to bring in more money... including from private and foreign investment" said G. Raghuram, professor at the Indian Institute of Management, Ahmedabad and co-author of a report about railway modernisation. Raghuram said allowing private money into freight was a simple and relatively easy shift that would boost the economy. Railways' share of freight has fallen from 90 percent of the country's cargo in 1950 to one-third today, as congested tracks and slow speeds force shipments onto roads - in turn clogging them. The tougher task for Modi will be finding a sustainable fix to the funding crunch facing the railways, including by allowing foreign direct investment into the network, a move resisted by the railways in the past. By a conservative estimate, the railways need 20 trillion rupees ($334 billion) of investment by 2020, according to economist Tirthankar Patnaik at Religare Capital Markets said. That's far in excess of the 1.4 trillion rupees the sector is estimated to earn this year even after an unpopular fare-hike pushed through last month. "Though there are some areas where the private sector can play a role, the bulk of the investment will have to come from the government," said Shri Prakash, a former member of the Railway Board. Prakash said Modi needs to strike a balance between appealing to private profit-seeking investors and keeping fares affordable for the millions who depend on the network. In New Delhi, railway manager Sachan said the job of the railways was to "cater to the masses". "High speed is definitely important but it is much more important to give transport to our poor people," he said. 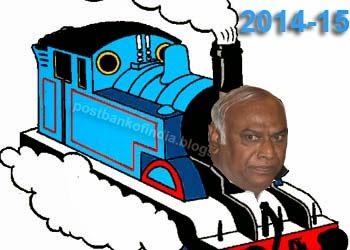 source: http://www.moneycontrol.com
Posted by Gagan at 20:36