Arvind Kejriwal's letter to PM Narendra Modi on Gas Prices : Another Drama or what?

Before the elections you had promised the people of the country that after coming to power you will bring down the prices and reduce corruption. However, during the past one month, instead of reducing prices and taking steps to curb corruption, prices of many essential commodities have been increased leading to public outrage.
It is being seen that your government is resorting to increasing prices without eradicating corruption and this will not solve any problem. The extra money generated from such hikes is pilferaged.
Take the latest example of railway passenger fare hike. We all fully well know about the rampant corruption in Railways. The government logic is that to provide better facilities, fares have been hiked. But how can we accept this argument?
Every government gives this faulty logic to justify the price hike. However, it’s been seen that despite regular fare hikes, facilities in railways have only deteriorated
It would have been better had your government deferred the railway fare hike for a year or six months atleast, and instead should have taken some strong measures to curb corruption in railways. It is possible that after having done that, maybe after a year there would have been no need to increase the passenger fares.
What is more saddening is that though your government has increased the railway fares, it has taken no step to curb corruption in railways.
Now your government appears to be making the same mistake in the matter of gas pricing also.
According to reports coming out in newspapers, your government is preparing to shortly increase the prices of natural gas. We had apprehended earlier only that after the elections the prices of natural gas will be doubled. We sincerely request you not to hike gas prices which will only benefit Mr. Mukesh Ambani and the people will be further burdened by rising prices.
Through this letter I am bringing some facts to your notice, which state that actually the prices of natural gas in India need to be reduced rather than increasing them.
Today you purchase a unit of gas from Reliance for $ 4.205. The RIL spends less than a dollar on production of one unit of gas. That means the RIL is reaping a profit of more than 325 per cent. The facts below prove that the RIL actually spends less than a dollar on excavation of a unit of gas:
Despite this it’s beyond any reasonable understanding as to why the then Congress led UPA Central Government on April 1, 2009 decided to hike the gas prices to dollars 4.25 per unit.
Today the exchange rate for dollar is Rs. 60.2. This means that at today’s rate the RIL is getting Rs. 252.8 per unit. It’s not difficult to comprehend that if the RIL was making a good profit in 2009 by selling gas at Rs. 110.9 per unit, taking into account even the rate of inflation today, how much profit the RIL is making by getting a rate of Rs. 252.8 per unit.
It is amply clear that the rate of $ 4.25 was fixed by the UPA government to allow the RIL a hefty profit.
We have been consistently saying that gas prices in India are much higher as compared to many other countries. Please have a look at the prices of gas in some countries

The Comptroller & Auditor General (C&AG) has tried to audit the RIL accounts but the RIL has resisted it by refusing to show its complete account. The question that naturally arises is, if the RIL has nothing to hide, why it is not showing its complete account to the C&AG. Whatever accounts have been made available to the C&AG, this auditor has found major irregularities.
In this matter the C&AG has submitted its two reports to the government, both of which point towards large scale corruption and embezzlement. If despite all this no action is taken against the RIL and gas prices are raised to benefit it, this will be a big fraud on the people of this country.
The government owned ONGC has filed a case against the RIL in the Delhi High Court alleging theft of its gas to the tune of Rs. 30 thousand cr. An FIR must be immediately be registered against such a company which is openly indulging into the loot of natural resources.
The purpose of giving oil and gas wells and fields to the RIL was that it fulfills energy needs of the country. Reliance was produce 80 mmscm gas everyday, but it has failed to produce even 10 per cent of it. Allegation is that the RIL is hoarding gas and is deliberately creating artificial scarcity of gas so that it can blackmail the government for increasing the gas prices. These tactics of the RIL are forcing the government to import the gas at a very high price. Now the government has to decide whether it wants to cave in to RIL’s blackmail or to take stern action against the RIL and stop the wrong doings by the company.
The BJP had strongly resisted the UPA governments attempt to hike the gas price. The Parliamentrary Standing Committee headed by Shri Yashwant Sinha in its report presented to Parliament on August 7, 2013 had strongly recommended that the prices of natural gas should not be hiked.
On March 25, 2014, senior BJP leader Mr. Ravi Shankar Prasad had publically stated that the party completely agreed to standing committee recommendations.
Since the BJP while in opposition was strongly opposed to any hike in gas prices then why after coming to power it wants to change its stand and increase the prices. In our view, it’s not correct to go for a price hike without checking corruption.
When it is clearly written in black and white in the C&AG reports about the corruption and fraud of the RIL, it is my sincere request that you should not increase the prices of natural gas without taking strict action against the RIL.
If you take a decision to increase the prices of natural gas, it will lead to a disastrous price rise in the country. CNG, PNG and electricity – everything will become costly.
You are requested to reconsider the decision of your government to hike the prices of natural gas.
Thanking you
Arvind Kejriwal
Former CM Delhi                                                                              June 25, 2014
Posted by Gagan at 21:17 No comments:

Inflation: A passion for Indian Government.

This is one topic in which I do not have to think before writing an article. The recent price rise in the essential commodities has hurt the common man where it hurts the most. The prices of onion , tomatoes, pulses have skyrocketed which adds flavor to the otherwise normal lifestyle of below average Indian. The above statement is a sarcasm in itself, but its necessary to show the grave situation which the normal citizens of this country are facing in the normal time.
The prices of pulses which is nearly a staple diet for most of the country has risen to a large extent from the last 2 years. This may be due to less area under production for pulses in country or less per hectare yield of pulses or growth in demand. But the apathy is that there is no supportive government policy which could have helped India to raise the pulses production by giving more incentives to the farmers growing pulses, reducing loses to the intermediaries. One more benefit of higher pulses production is it takes less of nitrogenous fertilizers and is essential for regular wheat rice fields.
The prices of onion has risen nearly 300% or more in the last month. The first reason is inefficient government policy which do not foresee demand supply situations, since onions are perishable quantities. The recent unseasonal rains in Nasik area has destroyed 10% of the crops, but still the quantum of price rise cannot be substantiated. The major culprit here is no control over the last leg of supply chain i.e retailers , they are having the profit margin of more than 50% . They are speculating on the deficient supply and holding the common man on ransom. Moreover in India expert was stopped at a much later stage , which led to the spike in prices for the first instance.The rest and the last reason which is common to all, I would discuss in the later part of the article.
There is another factor which is at play in high inflation rates across the commodities and it is ever increasing rates of petrol and diesel. The common plea given by the government to the people of India during every rate increase is rising international crude prices, But they should first answer why there is double taxation by center and state on sale of petrol and diesel. My first question to the respective governments is why cannot these duties be reduced, so that at least the transportation cost for the common commodities is reduced.

Now let us come to the contentious issue which is common to all the commodities price rise and bone of contention between the government and opposition parties that is forward trading. Now some people will criticize me of knowing very little of the commodity trading, but my only point is why do you need speculative trading on the essential commodities, when you could have such trading on nearly each and every finance vehicle like equity shares, currency exchanges etc. The forward trading increases the speculation in markets and people who are really not in the supply chain of these commodities get into it and unnecessarily disrupts the chain leading to disparity in normal price mechanism of these commodities.

Similarly prices of milk and other commodities could be discussed singly, but I just want to make a point that a concerted serious action is required for dealing the situation as it is hurting the foundation of common man economics in India. All the arms of government machinery, NGO's, common man should make an effort to discuss this problem and devise solutions which are practical and pragmatic in nature. Well I am doing my part by writing and publishing this article on net, so that our online community is more educated on the topic which is raging in India currently.
Posted by Gagan at 02:49 No comments:

It is a stunning figure.... 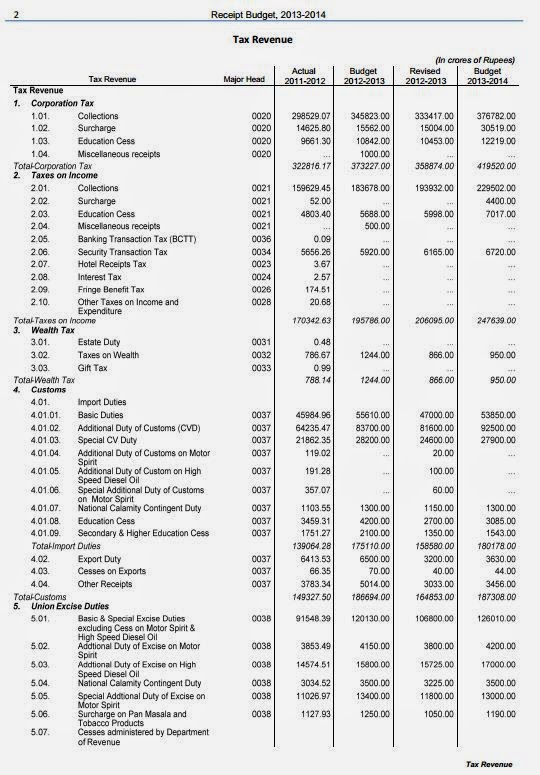 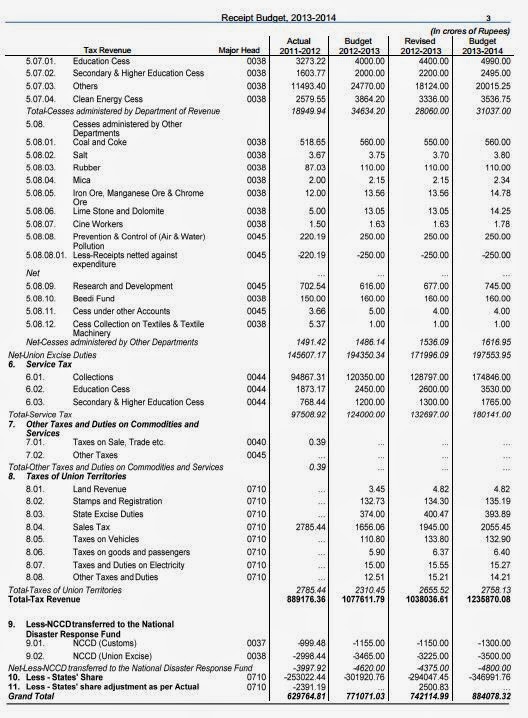 The Statement above summarizes, by broad categories, the estimates of tax receipts for 2013-14.
Posted by Gagan at 21:54 No comments: