Hindu nationalist Narendra Modi is set to become India's next prime minister, four major exit polls showed on Monday, with his opposition party and its allies forecast to sweep to a parliamentary majority in the world's biggest ever election.
Modi, of the Bharatiya Janata Party (BJP), electrified the lengthy contest that ended on Monday, with a media-savvy campaign that hinged on vows to kickstart India's economy and create jobs.
Yet much depends on Modi winning enough seats to form a stable government that can push through promised reforms.
Elections are notoriously hard to call, and polls taken before and after voting have a patchy track record at best. Results of the ballot are due to be announced on Friday.
A Modi victory would be a blow for campaigners who have long maintained he is an autocratic Hindu supremacist responsible for an outbreak of religious riots in his home state, Gujarat, in 2002 in which more than 1,000 people died, mostly Muslims.
Modi, who rose from humble roots as a tea vendor's son, was shunned by Western nations for years after the bloodshed in Gujarat, where he has been chief minister since 2001.
However, his rise on the national stage forced a rethink among the European Union and the United States, whose ambassadors have met him to patch up relations.
Modi denies the accusations against him and a Supreme Court inquiry found no evidence to prosecute him.
A majority of 272 seats in parliament is needed to form a government, although that is often achieved with outside support from regional parties.
India's staggered voting, spread over five weeks to reach the country's 815 million voters and move security forces around its varied terrain, ended at 1800 IST (1230 GMT) on Monday.
CONGRESS FACES HUMILIATION
The BJP-led alliance is forecast to win 270-282 seats, according to a poll conducted by research group CSDS for the CNN-IBN television network.
It forecast just 92-102 seats for the coalition led by the Congress party, which would be worst ever result for the ruling party led by the Nehru-Gandhi dynasty.
Congress spearheaded India's independence movement and has governed the country for over 50 years since freedom from British rule in 1947.
If the BJP and its pre-election allies can win an outright majority, it will be the best showing by a single group since Congress and its allies won 414 seats in 1984, when the assassination of then-prime minister Indira Gandhi created a swell of public sympathy for the party.
Several national exit polls over-estimated the BJP's seat share in the last two general elections in 2004 and 2009. The Congress party went on to form coalition governments on both occasions.
"We will only know if this 'Modi wave' has really happened after the election results," said Praveen Rai, a political analyst at CSDS who recently published a report on exit polls. "It still might be more of a media wave, a manufactured wave."
Uttar Pradesh, India's most populous state and a crucial political battleground, is particularly tricky for pollsters to forecast because it is a caste-sensitive state where some voters are afraid to speak frankly about who they chose, said Rai.
Another poll released on Monday, by Nielsen for ABP News, showed the BJP-led alliance hitting 281 seats. A third, by Cicero for the India Today group, predicted Modi's alliance would take between 261 and 283 seats, and pollster C-Voter forecast a tally of 289.
One outlier poll, by Today's Chanakya, showed the BJP emerging with enough seats to rule on its own.
BULL MARKET
The election reached a climax on Monday as Modi sought to secure his ticket in Varanasi, a holy city for Hindus on the river Ganges in Uttar Pradesh.
Stock markets have in recent days hit record highs on hopes that the exit polls would show the BJP and its allies winning a majority, boosted by both Modi's pro-business image and the prospect of an end to the coalition governments that have slowed the pace of reform in recent years.
The Nifty index breached the psychologically key level of 7,000 points for the first time on Monday, breaking a record high of 6,871.35 that it hit on Friday.
The benchmark BSE Sensex hit an all-time high and the rupee touched its strongest levels in 10 months on Monday. Several analysts expected the rally to continue through the week.
"The implications of a strong NDA government at the centre is that the quality and composition of the capital flows will improve," said Rupa Rege Nitsure, chief economist at Bank of Baroda. The BJP and its allies are known as the National Democratic Alliance (NDA).


Should Modi fall short of a majority when the results come in on May 16, he will need to strike a coalition deal with some of India's increasingly powerful regional parties. 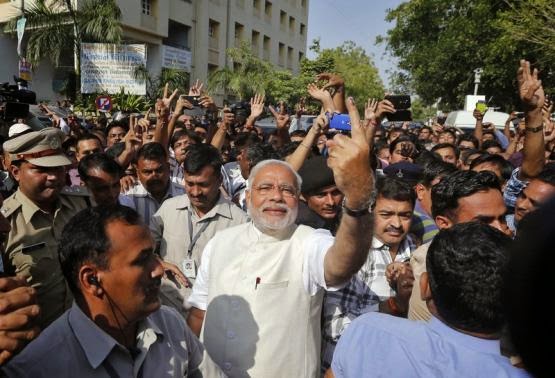 So Finally the List is out for Public for all the candidates in Amethi. Dr. Kumar Vishwas is the most Educated candidate in Amethi. 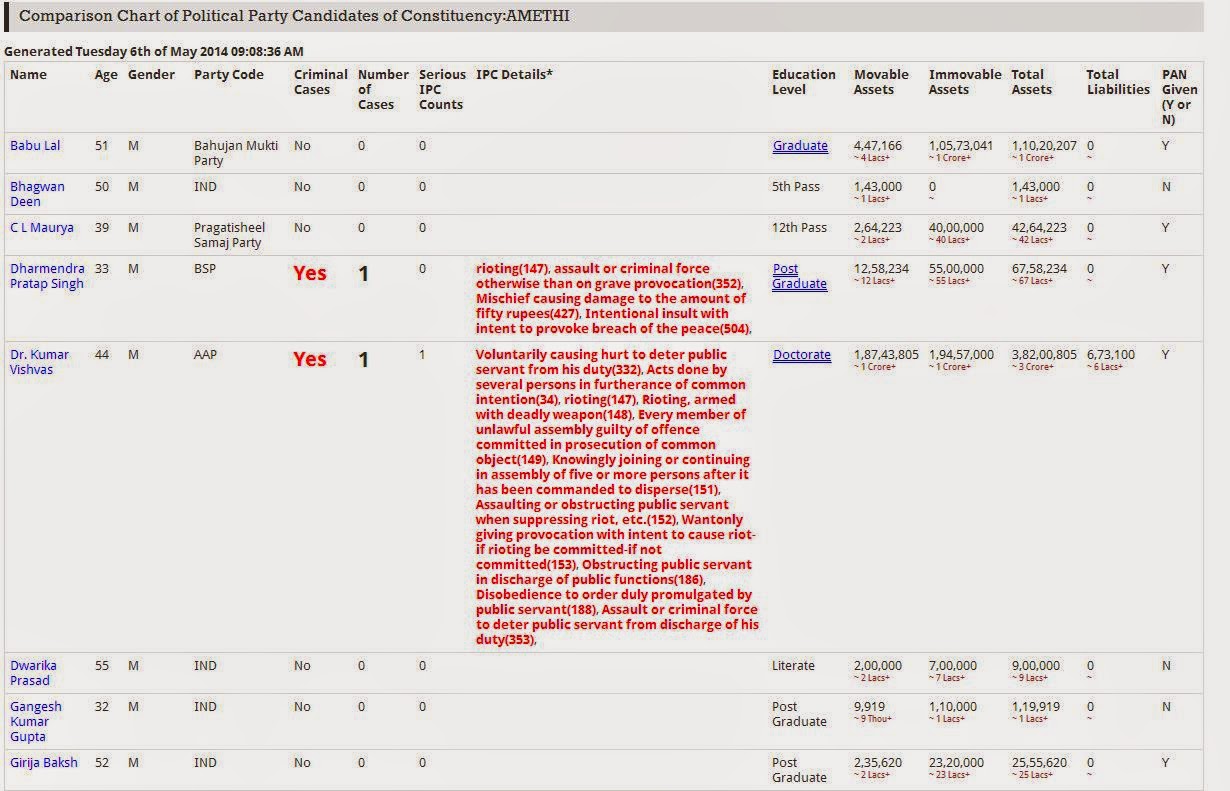 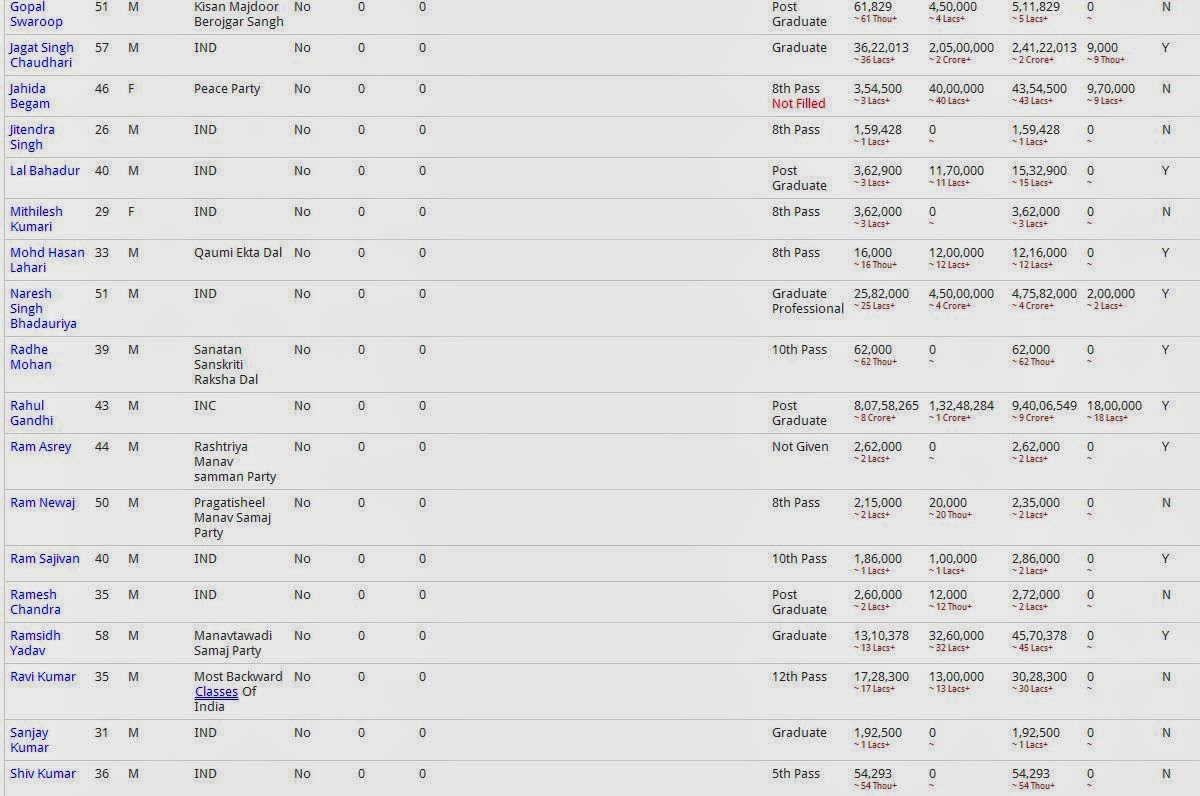 Another surprising thing is Mr. Rahul Gandhi is having half Share of Farm House in Mehrauli near Delhi Gurgaon Border & the cost of that Farm House is just 2 crore rupees where as if you see the flat rates there you will be surprise to know that there is no flat less then a crore there (3 BHK Flat).
I am attaching the Details of his Farm house below (details submitted by him to Election Commission India).