OBAMA TO INDIA ON INDEPENDENCE DAY:2015 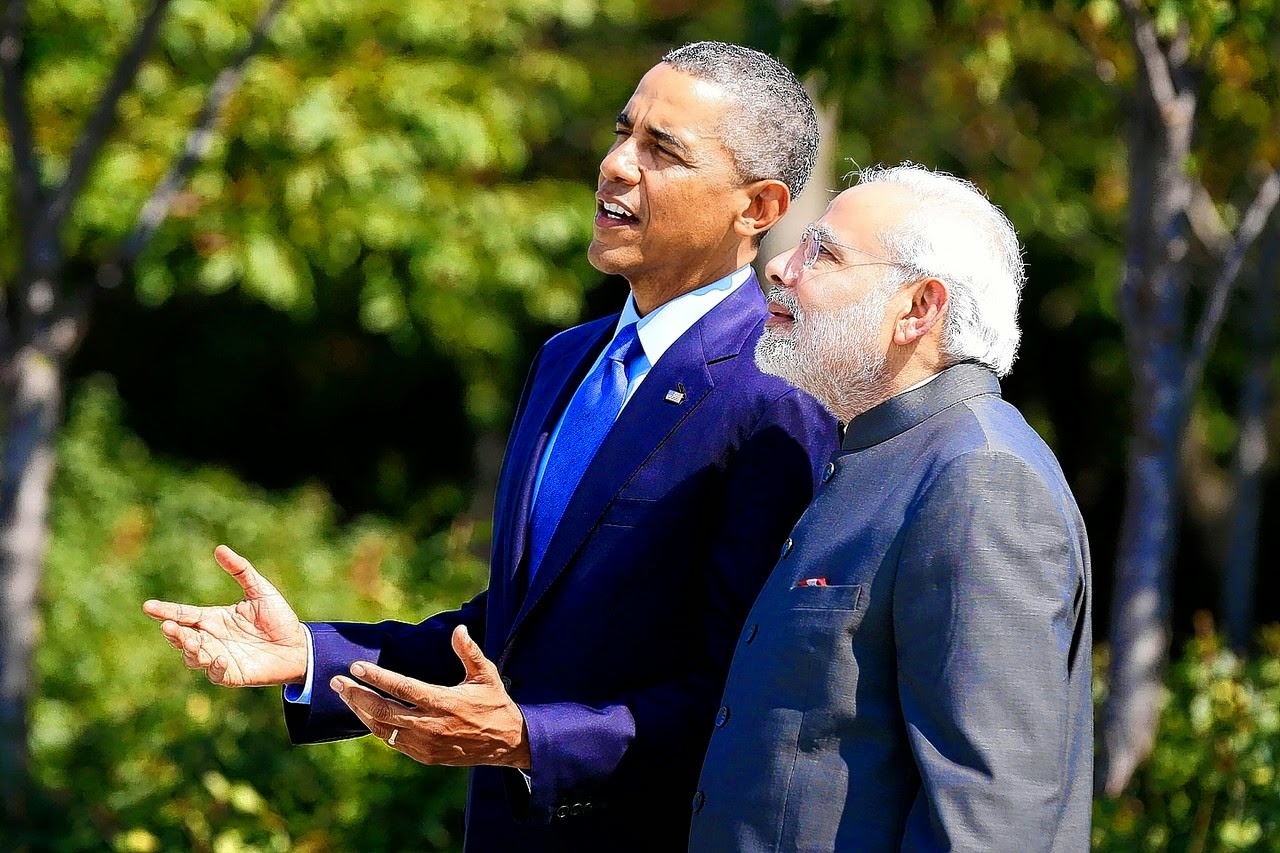 Come Jan. 26 next year, Barack Obama will become the first U.S. president to shatter a symbolic taboo: inviting an American as chief guest at India’s annual Republic Day celebrations.
For Prime Minister Narendra Modi, the president’s visit will mark both a diplomatic and a political coup. It supplies a fresh burst of momentum to U.S.-India relations, raises Mr. Modi’s standing as a global leader of consequence and aligns the prime minister’s political base in a way that makes sense for both him and his party.
Mr. Obama’s trip to India will be heavy with symbolism. The sight of an American president reviewing India’s traditional Republic Day parade of military might won’t be lost on either of India’s longtime adversaries, China and Pakistan, or on its East Asian friends such as Japan. It sends the message that while India may be in a tough neighborhood, it isn’t without powerful allies.
As the first sitting U.S. president to visit India twice—the first time was in 2010—Mr. Obama will also underscore the importance the U.S. places on cultivating stronger relations with Asia’s second-most populous country. Coming on the heels of Mr. Modi’s high-profile September trip to the U.S., Mr. Obama’s visit may also spur obstreperous bureaucrats in both Washington and New Delhi to match the symbolism of U.S.-India relations with substance.
Breakthroughs in joint defense manufacturing, civilian nuclear commerce and trade carry the most promise. Mr. Modi will also hope, perhaps unrealistically, that Mr. Obama will spur fresh interest in India from private American investors.
Those who claim that India has little to gain from feting an unpopular president not known for his foreign policy chops miss the larger point. Even a wounded U.S. president remains the most powerful person on the planet. A resurgent, Republican-controlled Congress notwithstanding, Mr. Obama retains considerable leeway to shape foreign policy in his remaining two years in office.
For Mr. Modi, Mr. Obama’s visit will cap what, by any standard, has been a dramatic international coming-out party for India’s leader. As the prime minister seeks to shore up important friendships abroad and reignite economic growth at home, the visit presents an opportunity to bask a little longer in the unexpected glow of international approbation that has greeted him ever since his emphatic election victory in May.
By the end of January, barely eight months into a five-year term in office, Mr. Modi will have hosted the leaders of Australia, China, Russia and the U.S., as well as all but one (Bangladesh) of the leaders of the eight-member South Asian Association for Regional Cooperation. Add to this Mr. Modi’s trips to Australia, Brazil, Japan, Myanmar, Nepal and the U.S. and a picture emerges of a prime minister more deeply engaged with foreign policy than virtually any of his predecessors.
While the thrust of Mr. Modi’s whirlwind diplomacy has been economics—his major trips abroad invariably include time spent selling India to investors—they also serve an important political purpose at home. By flaunting his international acceptability to voters back home, Mr. Modi has effectively robbed his political opponents of a cudgel they long used to beat him.
Inundated with images of Mr. Modi bear-hugging Shinzo Abe, strolling beside Mr. Obama at Washington’s Martin Luther King Jr. memorial, or taking a selfie with Australia’s Tony Abbott, the prime minister’s critics can no longer argue that he is an international pariah. In 2002 when Mr. Modi was chief minister of Gujarat state, about 1,000 people—three-quarters of them Muslim—died in sectarian violence. He has long denied condoning the violence, and India’s courts have not found evidence with which to prosecute him. Now the cloud of international disfavor that has long hung over Mr. Modi has all but disappeared.
Mr. Obama’s public embrace of Mr. Modi underscores this change. For nearly a decade, the U.S. spearheaded Western opposition to the Indian leader. In 2005, the U.S. denied Mr. Modi a visa over allegations of “severe violations of religious freedom” stemming from the Gujarat riots. And it was the last major Western country to end a high-level boycott of Mr. Modi when Nancy Powell, the U.S. Ambassador to India at the time, met with Mr. Modi just months before the Indian elections this summer.
For his part, Mr. Modi has been keen to erase the stigma of past slights rather than to dwell upon them. He likely recognizes that many of his supporters—upwardly mobile youth who dream of getting ahead in a market-based economy—are also those most favorably disposed toward America. Moreover, the prime minister’s most uncompromising foes—leftists and Islamists—are also precisely those Indians most likely to blame the U.S. for all the world’s ills, both real and imagined.
For Mr. Modi, rolling out the red carpet for Mr. Obama makes sense in terms of both policy and politics. Fortunately for him, the U.S. president also sees the logic of deepening ties with India’s most powerful and popular leader in a generation.
source:wsj
Posted by Gagan at 19:27 No comments:

Re-elections in Delhi : Who will hit the bull's eye this time?

Preparing for the polls, Aam Aadmi Party chief Arvind Kejriwal today said he will focus on Delhi for the next five to 10 years and any decision on fighting elections in other states will be taken only after people's mandate in the capital. The civil servent-turned politician, who faced severe criticism for quitting as Delhi chief minister in February, said AAP was "fully ready" to take the electoral plunge and identified BJP as its main opponent.
"We are only concentrating on Delhi. As far as I am concerned, I am going to focus on Delhi for next five to 10 years," Kejriwal, who led AAP to a dream debut in the Assembly polls in December last year, said.Noting that a strong base in the national capital was necessary for the party's growth, the 46-year-old leader said any decision on fighting elsewhere will be taken after polls in Delhi."Till Delhi elections, we are not fighting in any other election. After polls here, the party will decide where to fight and where not to fight," he said.The AAP leader also strongly rejected criticism that he does not know how to govern, saying people were amazed to see the speed at which the AAP government was taking decisions and provided relief to them."We are very confident of our victory. People were amazed to see the speed at which our government was functioning and the kind of decisions we were taking. We are confident of coming back to power," he said.Kejriwal, who had emerged as a mascot of an alternative brand of politics after the Assembly polls last year, said BJP has been running "propaganda" that AAP does not know how to govern."They say we do not know governance. I want to ask what is governance. In the last 65 years, BJP have been in power in so many states. Can you name a single state where corruption had come down substantially? Congress has been in governance for 65 years at the Centre and in states, they could not contain corruption. We did it in 49 days. We know governance. They do not," he said.Kejriwal said BJP's decision not to project a chief ministerial candidate reflected the party's lack of confidence in facing the electorate and said people will reject it in the polls."BJP has done nothing for the city. It could not contain price rise. Congress could not contain price rise. But we had controlled it," he said.Kejriwal said Congress will not be able to put up a strong fight in the polls. "The fight will be between AAP and BJP."On recent clashes in various parts of the city, the AAP Chief, without naming any party, said, "A trend of instigating riots ahead of elections has emerged."Asked whether Narendra Modi capitalized on the issue of corruption in the Lok Sabha polls though he and Anna Hazare made it a national issue, Kejriwal evaded a direct reply but said the Prime Minister has not been able to contain graft so far."He (Modi) has his own style. I have my own. If he filled the vacuum that time, we will now see what he does now. He promised that he will bring down corruption. So far he has not done anything. People have hopes. People still think he will do something. We had done it in 49 days. He is in power for around 200 days," said Kejriwal.He said Congress had failed to play the role of a strong opposition."A weak opposition is bad for the country. Opposition is very weak now. We need a strong opposition," he said.Asked whether Congress Vice President Rahul Gandhi will be able to revive the party, Kejriwal said, "That is for Cong to decide."On whether Congress will be able to come out of the current situation, Kejriwal said, "It is their internal matter. They will have to sort it out."

source:TOI
Posted by Gagan at 20:01 No comments: