Social media is sometimes called as a vital weapon for the politicians. Some people refer to it as a marketing policy for promoting the campaigns and the politicians describe it as a platform to connect with the common masses.
Significantly the politicians are making a comprehensive use of social mediums such as Facebook and Twitter, as they allows them to post pictures, add videos, send detailed mass messages and most importantly they are interacting publicly among the common masses.  Indian Prime Minister, Narendra Modi’s is gaining widespread popularity all across the world; social media is playing a major role in it.
Here is the list of top 5 political leaders all over the world who are most followed on social media websites as compiled by The Times of India.
(1)  Barack Obama
Barack Obama, the 44th and the first African American president of the United States, is the most followed politician on both Twitter and Facebook. He was the first presidential candidate to effectively use social media as a major campaign strategy in America.
Obama’s official page, @BarackObama has 46 millions followers on Twitter and 42.4 million likes on Facebook. Obama has used Twitter to promote legislation and support for his policies. He has also used his account to respond to the public regarding the economy and employment.

(2) Narendra Modi
Modi maintains the number 2 position at over 21 million likes for his verified page on Facebook and 8.5 million followers on his official account on Twitter (@narendramodi and @PMOIndia). Modi has the fastest growing Facebook page for any elected official in the world.
His timeline is constantly updated with thoughts and views about the current affairs in the world. After BJP's win in the 2014 Lok Sabha elections, Modi thanked to various world leaders on Twitter when they tweeted their congratulatory messages to him. 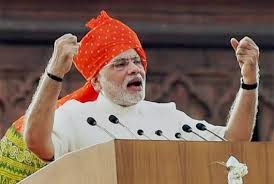 (3) SB Yudhoyono
SB Yudhoyono is the president of Indonesia since 2004. He is constantly active on social media with more than 5.37 million followers to bring out reforms and highlights on the use of technology.
Yudhoyono, signs his special tweets with his initials SBY, sends out a standard of 7 tweets a day.  Inspired by the wide use of social media in the country, Yudhoyono has launched various social media programs to improve its administration to narrow time lapses in responding citizen’s complaints and queries.

4. Mitt Romney
Mitt Romney is an American politician and businessman who was the Republican Party's nominee for President of the United States in the 2012 election. Prior to his presidential bid, he served as the 70th Governor of Massachusetts from 2003 to 2007.
The year 2012 saw the rapid emergence of followers for Romney with around 60, 000 followers per day on Twitter. Today he has 11.3 million likes on his Facebook account.
5. Prabowo Subianto
Indonesia's social media-loving youth has taken to Twitter, Facebook and other social media platforms to record their thoughts after voting in the presidential poll.
Prabowo's centralized; top-down social media campaign markets the candidate as a strong, decisive leader.