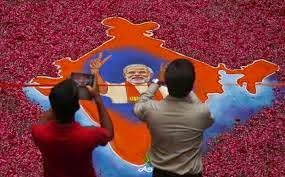 On September 2, Modi Sarkar completes 100 days in Office. Prime Minister Narendra Modi and his Council of Ministers took Oath of Office and Secrecy on May 26, 10 days after the verdict 2014 was announced.

News starved media, joined by the Congress and its cohorts are desperately searching for the report card of Narendra Modi Government as it enters 100 days in the Office.

Honestly, all an independent commentator could say for now is that the story of India has changed between before and after May 26, the day Narendra Damodardas Modi took change as India’s 14thPrime Minister. He is simply focusing on fixing the 10-year-long policy paralysis of the previous UPA dispensation. His 100 days of work shows Modi Sarkar is on the right track.

Narendra Modi Government has shouldered loads of hopes and aspirations of the people. The Prime Minister looks confident to fulfill those hopes and aspirations. In the last 100 days, the nation has moved from an era of policy paralysis to an era of policy priorities. In 100 days in Office, the Narendra Modi Government has successfully prepared a roadmap for India’s development.

Ever since Modi took the reins, he has been continuing his focus on ‘Minimum Government and Maximum Governance’ in every step. Modi Government’s sheet anchor for governance ‘Sabka Saath, Sabka Vikas’ (Together with all, development for all) has instilled a sense of confidence among the citizens. Undoubtedly, a pro-active approach has been adopted by the Government to fulfill the aspirations of the people. There has been a major shift in work culture across Ministries. A new sense of accountability has gripped the bureaucracy. There is a tremendous amount of pressures on both the Ministers and the bureaucrats to fulfill the tide of expectations of people.

The following are the 10 things Modi Sarkar has achieved in its 100 days in Office:

The first decision Modi Sarkar took after assuming Office was setting up of a Special Investigative Team (SIT), headed by former Supreme Court Judge MB Shah, to unearth illegal money stashed in tax havens. The SIT has already prepared a comprehensive action plan, including creation of an institutional structure that could enable India to fight the battle against black money.

2. Bringing economy back on track

In a bid to arrest inflation, Modi Government asked States to delist fruits and vegetables from the Agriculture Produce Marketing Committee (APMC Act). This decision has protected farmers from the middle men and succeeded in preventing hoarding. This in turn has helped in taming inflation.

With inflation on check, economic growth is picking up steadily. It is important to note that Indian economy has thrown up the best growth figures in two-and-a-half years. The GDP growth in April-June quarter is the highest in the last nine quarters. This is a sufficient indication that economy is turning around under the leadership of Narendra Modi.

Modi Sarkar has rolled out the Pradhan Mantri Jan Dhan Yojana. The ambitious scheme aims at a comprehensive financial inclusion by opening of bank accounts of people who have been left out in the process so far. On the inauguration day, a record 1.5 crore bank accounts were opened under this scheme.

The focal point of the Union Budget 2014 was infrastructure, a sector which was neglected in the last 10 years under the Congress-led UPA rule. The Government has attracted large-scale investments in infrastructural sector by reviving the Special Economic Zone (SEZ), streamlining the Public Private Partnership (PPP) models and creating Infrastructural Investment Trusts (InvITs). Work for the ambitious Diamond Quadrilateral rail network — connecting major metros across the country — is in the full swing. The Narendra Modi Government has laid the groundwork for its ambitious ‘100 smart cities’ project. To develop infrastructure in rural areas, the Government has launched Syama Prasad Mookerjee Rurban Mission and Deendayal Upadhyaya Gram Jyoti Yojana. The Government is also working on strengthening and modernising the boarder infrastructure.

Prime Minister Narendra Modi has abolished all Group of Ministers (GoMs) and Empowered Group of Ministers (EGoMs) which were set up during the UPA tenure. The move is expediting the process of decision-making in the Ministries and ushering in a greater accountability in the system.

To take administration closer to people and ensure that governance doesn’t get stuck in red tape, the Narendra Modi Government is streamlining the bureaucracy with thrust on transparency. The Government has amended the All India Service (Conduct) Rules, 1968. The amended guidelines mandate that the bureaucrats must maintain political neutrality, take decisions and make recommendations on merit alone and take decisions solely in public interest.

Narendra Modi Government has disbanded the 64-year-old Planning Commission. In 1950, then Prime Minister Jawaharlal Nehru formed Planning Commission on the line of erstwhile Soviet Union with an aim to formulating India’s five year plans. But during the 60-year-long Congress rule, the Commission was mostly used as a parking lot for cronies of the grand old party. They did nothing apart from sucking up to Congress and its Prime Ministers. Narendra Modi Government is in the process of replacing the Planning Commission with a new institution keeping in view of India’s needs amid changing global economic scenario.

In a path-breaking initiative, Narendra Government has got the National Judicial Appointments Commission (NJAC) Bill passed in both the Houses of Parliament. The Bill scraps the Collegium System of appointment of Judges of Supreme Court and the High Courts and established a six-member body for the appointment of the Judges. The Chief Justice of the Supreme Court will head the NJAC. Besides, the judiciary would be represented by two senior Judges of the Supreme Court. Law Minister and two eminent personalities will be the other members of the Commission.

The Narendra Modi Government is working overtime to weed out archaic rules and legislations from the statute books. Most of them are laws introduced during the colonial British rule and still prevalent in the country. These dysfunctional laws have no relevance in the present day. These are obsolete laws which only hamper governance by creating confusions. It only complicates the legislation process and stand as a hindrance within the system.

Prime Minister Narendra Modi’s SAARC diplomacy was indeed a bold step towards creating an atmosphere for multilateral economic cooperation. The common challenges that these nations face have made Narendra Modi create a common agenda of growth with mutual cooperation. During his visit to Nepal and Bhutan, Narendra Modi used the greater Hindu heritage as an instrument of foreign policy. Modi Government has given a strong message to Pakistan by calling off the Foreign Secretary-level talks after Pakistani High Commissioner to India Abdul Basit met Kashmiri separatists despite clear no from Foreign Ministry. For the first time in India’s history, New Delhi under the leadership of Narendra Modi has asserted that it can’t be bullied by the pressure from the Kashmiri separatists and various lobbyists. Narendra Modi’s ongoing Japan visit underlines the fact that India-Japan Strategic and Global cooperation can shift the balance of power in Asia.

100 days is too short a time to judge a Government. Let’s wait and watch with patience for the India’s real growth story to take shape in the days to come.

Source:Niticentral
Posted by Gagan at 20:59