"Tsunami is mightier than a wave" , this is what Delhi elections 2015 has proved. Modi wave overruled by Kejriwal Tsunami. The Arvind Kejriwal-led Aam Aadmi Party on Tuesday swept to power with 67 seats in the 70-member Delhi Assembly, leaving only three to the Bharatiya Janata Party and nil to the Congress. 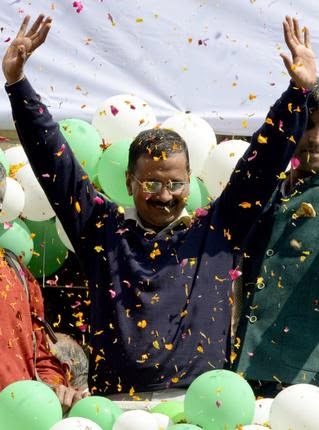 The Congress had been in power for three consecutive terms in the State until 2013 and the BJP had won all seven Lok Sabha seats in May 2014.
After consecutive wins for the BJP in Assembly polls across the country in 2014, Tuesday’s defeat was the first electoral setback for Narendra Modi since he became the Prime Minister in May last year.
Mr. Modi called and congratulated Mr. Kejriwal and later tweeted: “Spoke to Arvind Kejriwal and congratulated him on the win. Assured him Centre’s complete support in the development of Delhi.”
BJP’s chief ministerial candidate Kiran Bedi lost in Krishna Nagar, a seat won by Union Minister Harsh Vardhan five times in a row from 1993 to 2013.
Mr. Kejriwal will be sworn in as the Chief Minister on February 14, exactly a year after he quit the post after 49 days in power in February 2014.
Addressing party workers outside the party office after the verdict, Mr. Kejriwal underlined that the BJP has been routed due to its ‘arrogance.’
Mr. Kejriwal said: “It’s very scary, the kind of support that the people of Delhi have given us. I would like to tell all workers and MLAs, don’t be arrogant, else five years later we will be where the BJP and the Congress are today.”
At 32.2 per cent votes, the BJP managed to roughly retain its vote share of 2013, but Congress voters appear to have shifted to the AAP. The Congress share dropped from 24.55 per cent in 2013 to 9.7 per cent, even as the AAP’s share increased from 29.49 per cent in 2013 to 54.3 per cent.
The AAP’s campaign in the months leading up to the polls focussed primarily on ridding the system of corruption, lowering water and power bills, women’s security and transforming Delhi into a world-class city by bringing in structural reforms enumerated through the series termed ‘Delhi Dialogue’ conducted by the party.
On the other hand, the BJP released a Vision Document, instead of a poll manifesto, in the last leg of the high-decibel campaigning, which turned unsavoury on several occasions. The BJP’s campaign had Mr. Modi as its mascot after its strategy to project Ms. Bedi as its chief ministerial candidate flopped.
The party pulled out all the stops to counter Mr. Kejriwal by fielding a battery of Union Ministers and its entire national leadership. “Chalo Chalen Modi Ke Saath” was the main slogan of the party. The simmering discontent in the party ever since Ms. Bedi’s sudden arrival on the scene came out in the open after the party’s rout.
Ms. Bedi, who has been maintaining that she would take “full responsibility” for the results, said after the verdict: “I have not lost. Let the BJP assess, they are a national cadre-based party, I have not lost, I gave my very best.”
Failing to score a single seat, the crisis in the Congress deepened. Party campaign committee head Ajay Maken resigned, accepting responsibility but that alone is unlikely to insulate party vice-president Rahul Gandhi from the fallout.