End of 7th Phase of elections with attack on AAP candidate : Dharamvir Gandhi

Moderate to high turnout marked the polling on Wednesday in the seventh phase of Lok Sabha elections on a day when Narendra Modi sparked a major controversy by violating the election law by making a speech and displaying BJP's poll symbol in a booth.

The fate of some of the top guns of Congress, including Sonia Gandhi, and BJP like Modi, L K Advani, Rajnath Singh and Murli Manohar Joshi and Arun Jaitley were decided in the seventh round that covered 89 constituencies across seven states and two union territories.

The whole of Gujarat with 26 seats and Punjab with 13 seats were among the constituencies which went to polls today in which 13.83 crore voters were eligible to exercise their franchise.

While Punjab recorded a turnout of 73 per cent, the day's second highest after 81.35 per cent in nine seats in West Bengal, Gujarat witnessed a 62 per cent turnout, a quantum jump from 47.92 percent in the last Lok Sabha polls.

However, in an embarrassment for Modi, he violated election laws by displaying BJP's poll symbol 'Lotus' and making a speech after casting his vote in a booth in Gandhinagar, after which an FIR was registered against him by police following a directive of the Election Commission.

Vadodara constituency in Gujarat, where Modi is contesting LS poll for the first time, saw a turnout of 70 per cent. He is pitted against Madhusudan Mistry of Congress.

Among the riveting contests in the state is that between BJP's Arun Jaitley, also making his debut in Lok Sabha poll, and senior Congress leader Amarinder Singh in Amritsar. Ambika Soni, who too is contesting her first national elections, is in fray from Anandpur Sahib.

Uttar Pradesh saw a turnout of 57.10 per cent in 14 seats where SP, BSP, Congress and BJP are locked in a bitter battle to establish supremacy. Congress, which had done quite well in this region last time, may find the going tough this time but Sonia Gandhi appears comfortably placed to win from Rae Bareli for a third consecutive term.

Polling in seven constituencies in Bihar, crucial for RJD, BJP and JD(U) whose chief Sharad Yadav is in fray from Madhepura, saw a turnout of 60 per cent.

JD(U), which broke ties with BJP in the state on Modi as PM issue, finds an uphill task this time, according to ground reports.

Jammu and Kashmir's Srinagar Lok Sabha constituency, where union minister and NC leader Farooq Abdullah is in fray, saw a turnout of 25.62 per cent, the lowest in today's exercise.

The seventh round saw completion of polling in 438 of the total of 543 constituencies. The exercise was already over in 349 constituencies in the first six phases. Voting in the remaining 105 constituencies will he held on May 7 (64 seats) and May 12 (41) before counting of votes is taken on up on May 16.

Gandhi along with his supporters were attacked allegedly because he was protesting against booth capturing by SAD workers. The AAP nominee has suffered injuries in the incident. Police is investigating the matter.

Deepinder Singh Dhillon is SAD's contestant from Patiala. SAD workers had earlier in the day damaged the control unit of EVM at the Bajwa Colony at Patiala and later banged the machine on the floor. 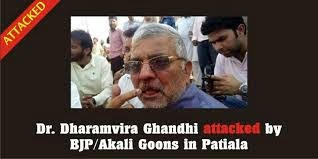