So finally in the last over of match, Arvind kejriwal has accepted the bouncer in the form of Modi. Despite of eggs thrown on Mr. Kejriwal, despite of black flags shown to him, finally he will be fighting against Modi in this lok sabha elections of 2014. Fighting against Modi is really a great decision of Kejriwal. When everyone is finding safe seat for themselves, Mr. Kejriwal has taken decision for most unsafe seat for him. But that can be game changer. In India there was Congress vs BJP always but this time congress has hidden some where & this time its BJP VS AAP.
Decision of Mr Kejriwal is really deep rooted. Now after his decision Nation will start thinking of Modi VS Arvind which means congress will be aside.

Yesterday, when i was watching News , i liked the wordings of one of the supporters of AAP who said " Kejriwal is having far better IQ then Mr. Modi" . Kejriwal is doing everything with his IQ and we have to accept that his IQ is far better then Modi. Where BJP has paid huge amount for the marketing of Modi, Arvind kejriwal without paying any amount will get the same marketing by just standing against him. Mr. Kejriwal has invited Modi for one to one debate but i don't think Modi will accept it.

One other important news is the decision of Election commission on ban on the price rise of cylinders for one more month. The credit of that thing goes to Arvind Kejriwal. Will that also have some impact on elections?
If people will appreciate Arvind for this? Our guesses can be wrong at this time, Lets wait & watch. 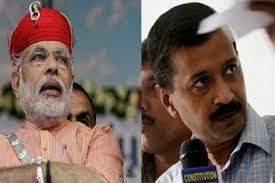